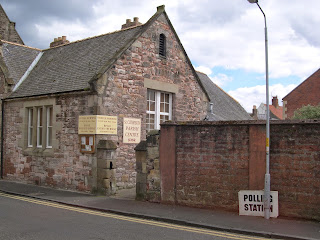 Has David Cameron ever read any Harry Potter books? Surely his children must have told him about them at least. So he should know that the motto of Hogwarts school is 'never tickle a sleeping dragon', and yet he has learned nothing from it. A few hours ago Alex Salmond announced that 'the Scottish lion has roared this morning across the country'. This is not surprising to those of us who follow these things closely, because any lion would roar if it had been, not just tickled, but poked and prodded mercilessly for weeks, as the Scots have been by Mr Cameron.

The Conservative party decided that their best electoral hope was to terrify the English with dire predictions that a Labour government could only stay in power with the support of the Scottish National Party, and that it would thus be forced to allow its leader Nicola Sturgeon, whom it depicted as a combination of Valkyrie and Wonderwoman, possessed of political super-powers, to sweep down across the border and lay waste to England. This kind of rhetoric became more and more absurd as the campaign wore on, and by the final week before polling had crossed the line into being offensive. The final straw for me was when Boris Johnson, wannabe prime minister, said that a Labour-SNP alliance would be 'a jock-alypse'. Even allowing for the fact that Boris is known for his eccentric humour, this is not okay. He would not think it acceptable to coin a facetious term featuring any other ethnic nickname or stereotype, but somehow insulting the Scots is fine. The fact he did not realise that this expression was offensive illustrates the problem.

The Conservatives have now got what they wanted. The English have rejected the scary Labour party with its nasty foreign allies and returned a Conservative government with an overall majority, in defiance of all opinion polls. The Scots have rejected everybody except the SNP. The most memorable aspect of the night for me was hearing James Naughtie on Radio 4 sounding genuinely shaken by the Scottish results he was reading out. It takes a lot to shake a hardened news and politics presenter like James Naughtie. At one point he used the word 'revolutionary' about what was happening in Scotland, and he was right. This is not a vote for a political party, this is a wholesale rejection of the Westminster government and the present constitution of the United Kingdom.

The Conservatives are committed to holding a referendum on membership of the European Union in a couple of years time. There is a real possibility that it will return a majority for Yes to leaving in England but for No in Scotland, and Nicola Sturgeon has astutely reserved the right to demand a second referendum on independence if England tries to force Scotland to leave the E.U. against its will. I think she would be right to do so. But the consequences of that are frightening, at least from my viewpoint right on the border. We will once again have to face the bullet we thought we had dodged last September, that Berwick could become the frontier of the E.U.

I believe there is now almost no question that a second independence referendum would return a Yes majority. In the immediate aftermath of the referendum last September, I pointed out on this blog that the headline figure of 55% favouring staying in the UK should not blind us to the fact that the percentage of No voters had fallen steadily over the course of the campaign. Guess what, it has kept on falling for the last seven months and here we are with the result today.

There are only so many ways of saying 'David Cameron is an idiot' and I have used most of them on this blog over the past two years. To my great regret he is now an idiot who seems likely to keep being prime minister for another five years. His utterly inept handling of the Better Together campaign and his cynical use of the SNP as a bogeyman to frighten his core support in the south of England has brought us to this point. The only ray of hope I can see right now is that Boris Johnson, who is far more intelligent than Cameron, was on breakfast radio today already talking about the necessity to move towards outright federalism as the only way of countering the demand for full Scottish independence. I completely agree with him, and I hope he does penance for his ill-advised joke by forcing his party to get on with it and by ousting Cameron as PM if he refuses. The United Kingdom will not survive another five years of the Honourable Witterer for Witney.