Tories receive 'every mark of disapprobation' - in 1859 I am writing this during voting hours for the general election, so I can't tell you who won yet. I've just returned from attempting to mark my cross with a choice of using either a pencil tied on the right-hand side (I'm left-handed, and we're about the only minority group you're still allowed to discriminate against) or a free-range pencil with a broken point. My polling station is the one shown here, which the rest of the time is St Cuthbert's church hall. The clerk told me he was already so tired that he was struggling to read the numbers on my card, because turn-out has been brisk. There is always a rather moving contrast between the extremely low-tech nature of actually voting and the vigour of British democracy. As far as I can see the only technical innovation in the last fifty years has been the provision of a gadget that allows blind people to mark their paper unaided.

So I thought this would be a good time to write about an election held in Berwick back in 1859, before the introduction of the secret ballot, long before women's suffrage, and after only the most limited reform of the franchise. Michael Cullen, a local historian, has painstakingly researched this subject and written up his findings in this short booklet. I am entirely indebted to him for this information. 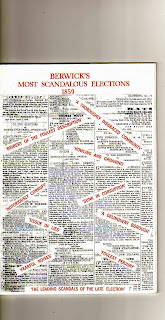 It seems that Berwick was notorious for corrupt practices in elections even by the lax standards of the 1850s, and the goings-on at the 1859 election were even more deplorable than usual. It was regarded as a 'cheap' seat because it only had 1,300 enfranchised residents, and buying that many votes was considered do-able by most candidates, who seem to have treated the matter as a straightforward cost-benefit analysis.

In those days the voters had to announce their choice of candidate within earshot of anybody who cared to hang around the polling station. This resulted not only in intimidation but in a running total of votes being kept throughout the day, so that the candidate who was behind knew he was behind and would probably go out and drum up some more support by whatever murky means seemed necessary. Although only a small percentage of the adult males of the town had a vote, most of the population had an opinion and did not hesitate to make it known. One local paper reported that ' votes given for the Liberals were received with the most enthusiastic cheering, while those electors who gave their support to the Tories were received with hisses, groans, and every mark of disapprobation'. The other local paper described the anti-Tory protests as 'groans, yells, hisses and cats' noises'.  When it was announced that the Tories had won, the crowd broke down a barricade set up to keep them back, over-turned the table being used by the clerks for refreshments, and 'shied' the resulting pieces of broken glass and crockery around the hall. Then they rampaged around the town breaking windows in the houses of known Tory supporters.

The Liberals decided to challenge the results of the election on the grounds that their opponents had engaged in extensive bribery. This had only been technically illegal since the passing of the Corrupt Practices Act of 1854 and cultural change was lagging behind. Such a formal legal challenge was a recognised custom at the time, and although the fee was very expensive it could be worth it if the outcome of the election was reversed. The procedure was that a Royal Commission was set up to enquire into the matter and numerous witnesses were required to travel to London to give evidence. They were paid a per diem rate for their expenses there, and since it was more than many of the voters earned back home, the result was that some witnesses were dismissed by the judge as being too drunk to say anything useful or even coherent, and at least one was arrested for contempt of court. The judge was also exasperated by the mysterious loss of memory afflicting many of the witnesses regarding the question of payment for their vote, most amusingly in the case of a man who said that he had seen a hand place a coin under his glass in the pub but had never caught so much as a glimpse of the body to which the hand was attached. The final report complained that some of the witnesses had 'prevaricated and perjured themselves with the most hardened effrontery'.

The picture which emerges from the proceedings is that it was usual practice for the candidates to withdraw several hundred pounds in coins from their banks and present it to their election agents to distribute as they thought best, with many nods and winks. The going rate per vote seems to have been about £2. One voter was brought by train from Beadnell and claimed that the money was for his train fare, but was at a loss to explain why it had been necessary to pay £2 for a ticket that normally cost 2 shillings. Some men accepted cash from one side and then voted for the other. Some happily accepted cash from both sides. Some immediately spent a chunk of the money on getting so drunk that they had to be held up in the polling booth. A policeman stationed on the town walls had reportedly encouraged the crowd to go down and get their share of the goodies, as 'there was plenty going', though he later denied saying any such thing. Some of the ladies of the voters' families had been offered silk gowns. And beyond straight-out cash payments there was widespread 'treating', the lavish purchasing of food and drink for voters.

The Commission finally found a long-ish list of people guilty of giving or taking bribes. The Tory agent fled the country to avoid arrest. It was generally conceded locally that the Commission ought to have looked more closely at what was going on over on the Liberal side as well, since they were well known to be up to all the same tricks. Michael Cullen wonders if hostility to the Tories locally was driving support for the case. From their behaviour on polling day, it certainly seems that anger was widespread among those who had no vote towards those who did have one and sold it to a hated party.

More disturbing than actual bribery is the evidence that loss of employment was a real possibility for a man who voted in a way disagreeable to his boss or a potential future boss. One voter said he had only voted for the Tory candidate because he expected him to offer his son a job. The introduction of compulsory secret ballot in 1872 removed this fear, and it also removed much of the incentive to bribe, since a candidate had no way of knowing whether he had got his money's worth. In the long run, though, it was only the extension of the franchise that ended routine bribery, as the number of voters became un-affordably large.

I have some concerns that the rise in postal voting at the present time may be re-introducing some of the 'corrupt practices' of the 1850s. Over the last fifteen years or so there have been numerous reports of people selling their postal votes on Ebay, handing them over to strangers in the pub in exchange for a drink, or allowing helpful candidates to fill the forms in for them. But I can't believe that this is typical of the 21st century voter. Even in 1859 there were reportedly some Berwick voters who refused bribes and told the agents they were not to be bought. Looking at the number of people waiting to use the broken pencil in the church hall today, I believe that their spirit lives on.
Posted by Elaine Housby