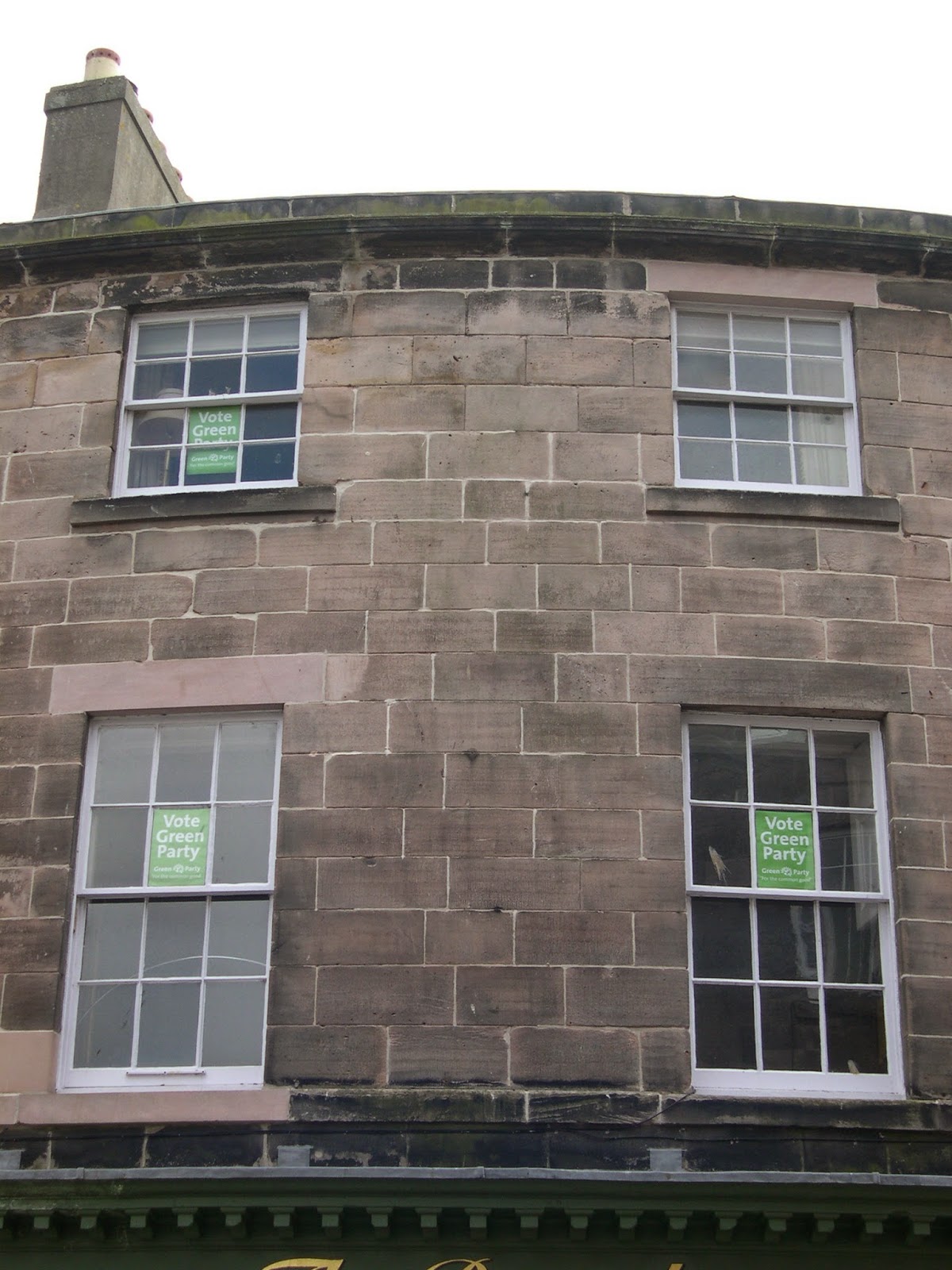 One of my neighbours here in Berwick is leaving nobody in any doubt about where their political loyalties lie. Their flat has another set of windows round the corner and there are Green party posters in all of them as well. Walking past them every day is starting to have a slightly brainwashing effect on me.

But I don't really mind that because it forms a valuable antidote to the cartloads of leaflets that the Liberal Democrats and Conservatives have been delivering to my mailbox. In fact the word 'leaflets' does not really cover it - some of them are disguised as newspapers.  So far the LibDems have the edge over the Tories both in sheer quantity of trees felled for the sake of winning my vote and in having the effrontery to send me a Christmas card. Their electoral machine was already fired up and running in December and at that time I had not yet learned to recognise a Derby return address as a warning sign that a letter comes from Clegg  Co., so I opened it eagerly in the expectation of finding a card from an old friend, only to find my local candidate Julie Porksen waxing lyrical about the happy family Christmas she was looking forward to and hoping I was doing likewise. I am sure that Ms Porksen would be saddened to learn that I hurled the card across the room and immediately became quite a lot less likely to vote for her. 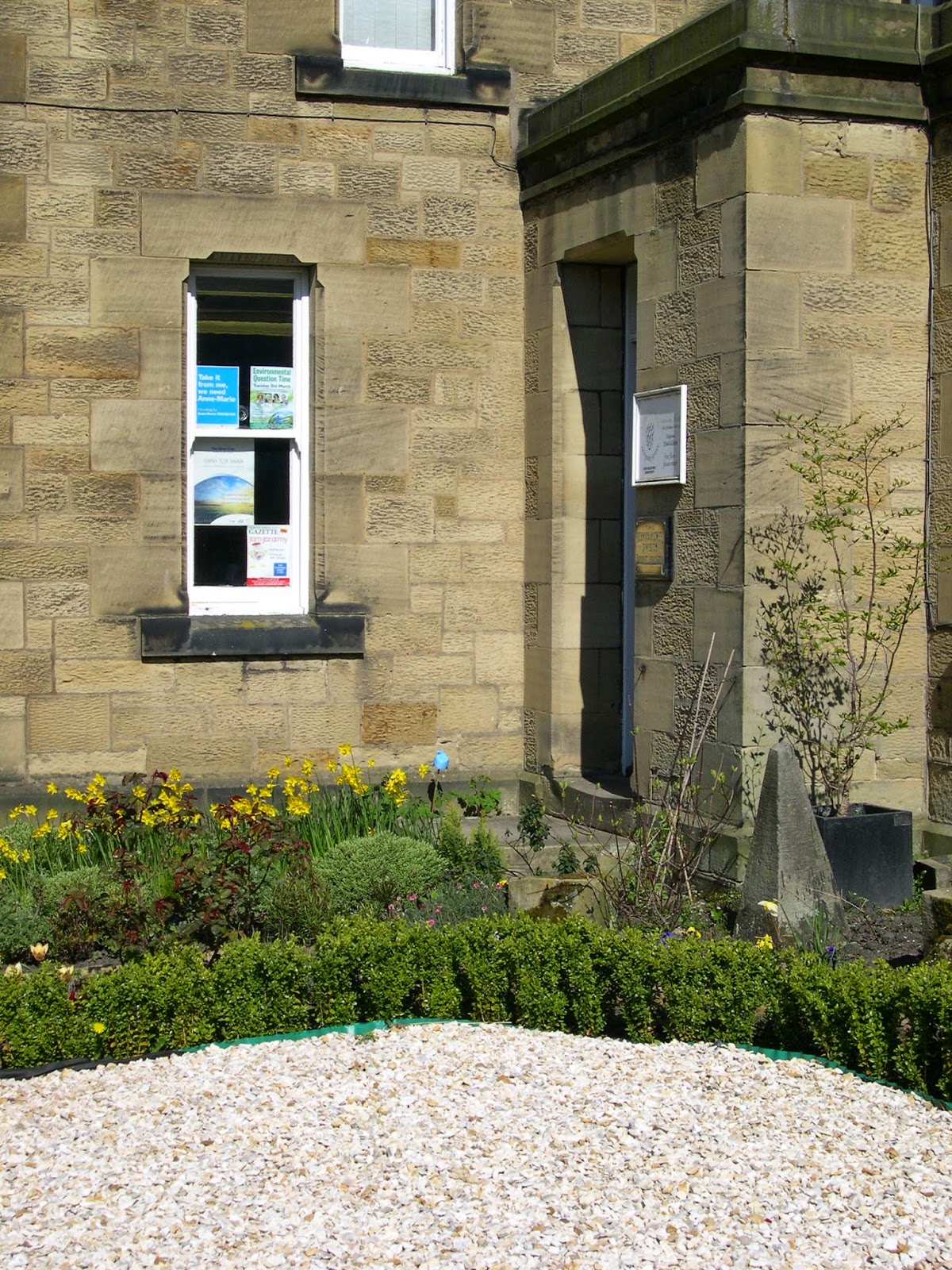 But please don't think that the Conservatives are trying any less hard. This is their constituency office in Alnwick. The reason that their garden is looking so beautifully groomed may be that David Cameron honoured our constituency with a visit last week. I only found out about it after it had happened, so I missed the opportunity to avoid him. The Conservative candidate Anne-Marie Trevelyan is being promoted with the cringe-worthy slogan, 'take it from me, we need Anne-Marie'. Thanks to the party's strong support among the farming community, Mrs Trevelyan is beaming out at the voters from fields, hedges and caravan parks across the constituency.

Despite being thirty miles apart and usually behaving as if they were entirely unrelated to each other, Berwick and Alnwick are in the same parliamentary constituency. It is in terms of geographical area the largest in England, though it still has fewer residents than many. The constituency is named after Berwick, which I'm quite sure galls many residents of Alnwick ("we're the historic county town, you know!").  After the blip when it elected William Beveridge, it stayed solidly Conservative, but it turned Liberal again in 1973 after the MP of the day resigned in the wake of a sex scandal, and has kept on returning Alan Beith ever since, partly because he is a likeable and hard-working man and partly thanks to large scale tactical voting by people who would really rather vote Labour. Mr Beith - sorry, he's now Sir Alan - has decided that 2015 would be a suitable time to retire, and the Conservatives are certain that they can now take the constituency back, because the anticipated reversion to Labour by coalition-haters will cost the LibDems their majority. Hence the visit by the PM himself.

Labour have never bothered to seriously contest Berwick, but this year they have roused themselves sufficiently to send me one leaflet, featuring their candidate Scott Dickinson posing in front of the railway bridge over the Tweed in a manner rather too obviously calculated to indicate, 'I do actually know where Berwick is, you know'. Although distracted by the shocking standard of proof-reading in the leaflet (I do that for a living and I notice these things), I can't argue with their central point that last time we voted LibDem tactically to keep the Conservatives out and ended up with both of them in government, so this time why bother.

The Greens have not so far sent me any leaflets at all. Some of my friends report receiving a Green leaflet, so maybe they just don't have the personnel to cover the whole town, though I would have thought that the occupant of the multi-postered house shown above could have strolled around the corner to deliver a few. The Green candidate is called Rachael Roberts and I keep getting her confused with Rachel Reeves, a Labour MP who is often interviewed about economic matters. I imagine some other people do too, and who can tell whether this works for or against Ms Roberts.

UKIP have just got around to delivering their one leaflet. Their candidate,Nigel Coghill Marshall, is using a photo that doesn't do him any favours, but there's always something appealing about the sheer purpleness of the Kipper stuff. Mr Coghill Marshall sent me a nice email telling me about himself after I emailed all the candidates asking them to upload their CVs to the website Yournextmp.com, a project run by the Democracy Club. None of them have done that, and the other four never replied to me either. During the 2010 election campaign I scanned and uploaded leaflets for this project, but in 2015 I have opted out of that because if I try to keep up with all the Trevelyan and Porksen leaflets my scanner will probably catch fire.

Late in the day, a sixth candidate threw his hat into the ring. Neil Humphrey is standing for the English Democrats. They are apparently similar to UKIP but have split from them because they object to UKIP saying that they 'believe in Britain', rather than in England. Do try to keep up. The EngDems' main policy is the creation of an English parliament to balance the Scottish parliament, and they have targeted Berwick as a key constituency because of worries about what concessions the Scottish Nationalists may be able to extract in the next parliament. This is of course right up the street of this blog, so I hope that the EngDems are able to scrape together the cash to print a few leaflets explaining all this in more detail and put one in my mailbox.