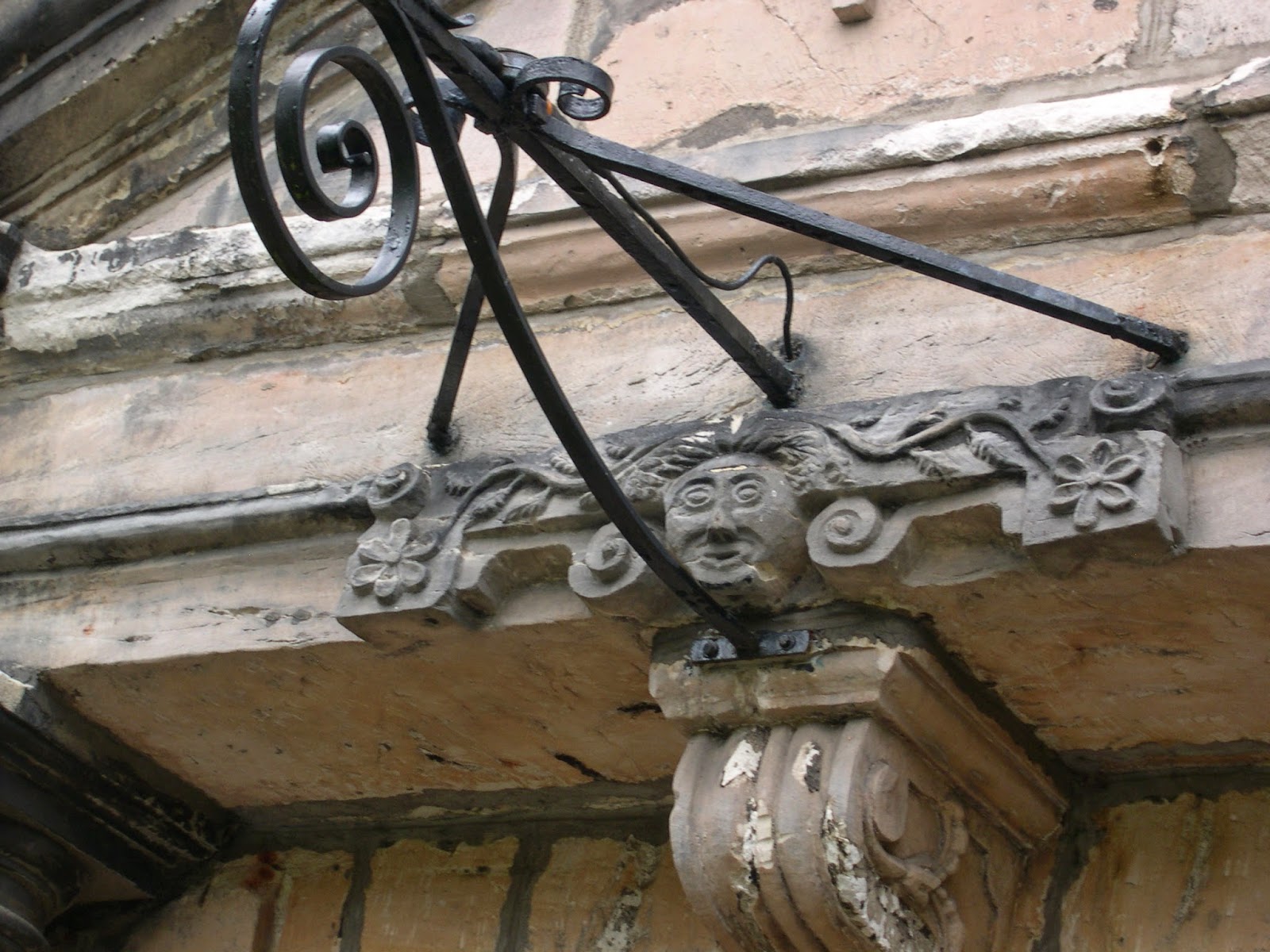 This is the carving on the lintel over the main door of the parish church in Berwick upon Tweed. It is an example of the type of figure known as a 'green man', that is, a man's face surrounded by foliage. These are apparently quite common on churches, much to the delight of Neo-Pagans who see them as an indication of the survival of pre-Christian belief long after Europe was nominally Christianised.

This one is evidently little known, judging by the fact that all the Google results for 'green man Berwick' were about a pub called The Green Man in Berwick Street, London.  The thing that always seems strange to me about it is that Berwick church is an extremely rare example of a church built during the Cromwellian period, that is the decade or so between the execution of King Charles I in 1649 and the restoration of the monarchy under Charles II in 1660 when hard-line Reformed Christianity was the power in the land. The original design of Holy Trinity church conformed to strict puritan principles: no steeple, no bells, no stained glass, no altar. Graven images of any kind were anathema to these strict Protestants. So why then put a Green Man over the door ??

I have found a great little website that explains all things to do with Green Men. It suggests many interpretations: that such images may have been purely decorative, with no remembered symbolic significance; that they may have been identified with the devil and placed over church doorways as a warning to worshippers; that they may have been perceived as Christian because of the tradition that the cross on which Jesus was crucified was made from wood from a tree descended from the Tree of Knowledge that was the downfall of Adam and Eve; and of course that they really were a lovingly retained symbol of folk practices related to the cycle of the seasons.

During my four years as a rather mature research student I went to a lot of conferences on religious studies, and developed a love-hate relationship with the modern pagans who attended them in quantities. Most of them were very pleasant and interesting people and I sometimes miss them. On the other hand the shiny-eyed enthusiasms and sweeping unscholarly statements that some of them were prone to frequently exasperated me, and put me off taking an interest in pre-Christian religions for a long time. I have now mellowed somewhat, and am prepared to take pagan survivals seriously again, though I still have issues with anything involving the 'collective unconscious'.

In fact I have mellowed so much that I have just re-read my old Pelican of  Gods and Myths of Northern Europe, a classic work by H.R.Ellis Davidson, born Hilda Ellis in 1914 and far removed from the scholar-practitioners who abound in academia nowadays, but very sympathetic to the loyal followers of Odin and Thor who witnessed the replacement of their ancient faith by Christianity. By the time I had finished this book I was quite convinced that the centrality of the crucifixion in the iconography of European Christianity has a lot to do with the centrality of the story of Odin hanging on a tree in order to acquire mystical wisdom in the faith which it slowly and with difficulty replaced. There are Old English poems whose imagery blends the two traditions of cross and tree almost inseparably.

So I am now open to suggestions about ancient symbols of foliage too.  I do have a nagging feeling that the use of this symbol on a church built on such severe puritan principles may weaken the argument that it was a genuine pagan survival and reinforce the view that it was intended to be either purely decorative or actively diabolic. Unless of course it was put up at a later date as an ostentatiously anti-puritan gesture. I think I need to do some more research. But I'm sure that lots of readers will be keen to help me with that.