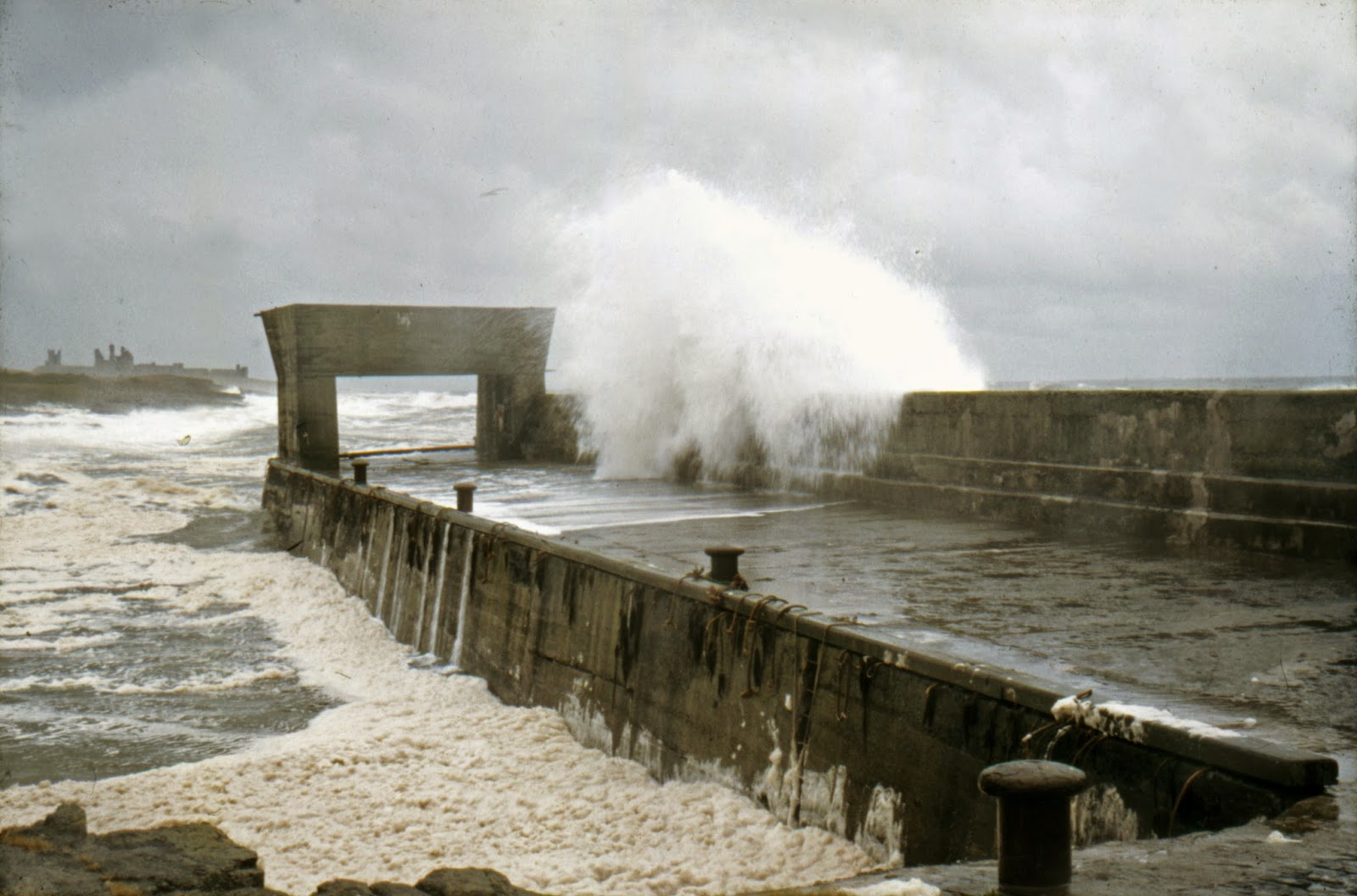 Discovering that it is possible to digitalise transparencies has opened up a whole new world of possibilities for blogging. I'm posting this old 35 mm slide just because it's such a great picture. It shows the harbour at Craster on a stormy day with the waves breaking impressively over the wall.

Definitely the kind of day when the emergency services put out stern warnings against standing on the harbour wall just to gawp at the view, but no committed photographer has ever cared much for health and safety. Certainly the one who took this, my late father John Housby, never did and nor did his camera club buddies. I have a photo of him gleefully standing on a cliff edge on the wrong side of a sign that says 'danger, do not go beyond this point', taken by one of the said camera club buddies. Maybe I'll digitalise and post that one some day.

Craster is a small fishing village in north Northumberland. It did not have a harbour at all until the family in the local 'big house', who have the same name as the village, had this one built as an act of philanthropy in the early years of the 20th century. Imagine what it was like having to launch a fishing coble straight out into the open sea. Challenging.  The village has its own history site here.

In the distance on the left side of the picture is Dunstanburgh Castle, a ruin so picturesque that it has become the greatest visual cliche in Northumberland and has accordingly been banished from my blog, but I'm prepared to let it just sneak into the corner like this. As I related in my post on interesting local place names, the name Craster is derived, according to Stan Beckensall's handy guide, from the Old English craw-ceastre, meaning a fort inhabited by crows. Looking along to the ruined castle it still seems a very apt name.  During my childhood visits to Craster we always had a cuppa in a local cafe called The Choughs. According to the RSPB website, the chough is indeed a bird of the crow family but it is no longer found on the north-east coast. Shame.

I used a section of this photo for the cover image of my first attempt at writing fiction to self-publish. I wanted to have a go at evoking the feeling of a small coastal village when the summer tourists have gone and the winter storms have arrived, and I ended up writing a short story set in a fictional village that is a cross between Craster and Seahouses. That has been quite well received and I am now working on publishing more short stories. I'll put the link on this blog when it's live.