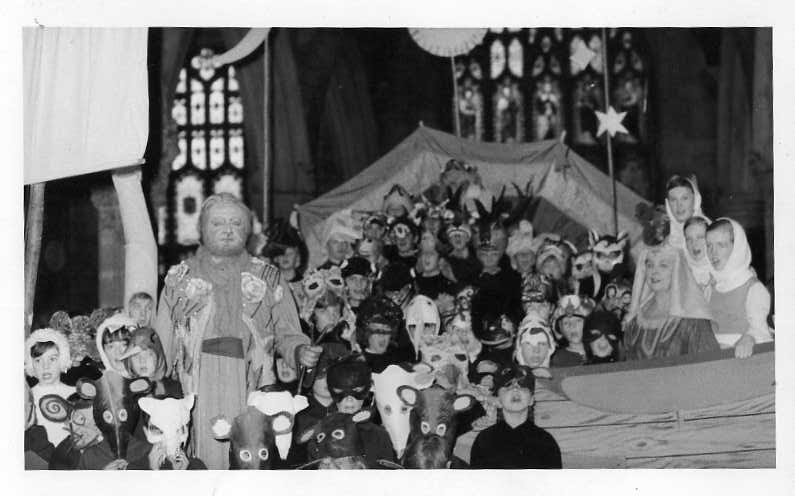 It has been raining a lot recently. I mean, a lot. On days when the rain never stops living on a river estuary loses some of its appeal. All I can see is water in every direction – water in the river, water on the ground, water in the sky. Water dripping off my sleeves in the library and making the books soggy. Water making the garden path so slippy that I skidded when fetching the wheely-bin back in and would have fallen if the bin hadn’t acted as a handy zimmer-frame.

I have started taking climate change more seriously recently, partly because there seems to be no doubt that the winters are warmer and wetter than they were when I was a child. There is something to be said for having less snow, but constant rain is not much fun either. It is a commonplace on days like this to joke that perhaps we should be building an ark. So when I came across this picture while sorting out my old photos, I thought, Hmm ... Maybe there is some useful knowledge to be gleaned from this.

The photo shows a performance of the Benjamin Britten opera Noah’s Flood, or rather, Noye’s Fludde, staged in St Michael’s church, Alnwick, in the late 1960s, starring the great bass-baritone Owen Brannigan as Noah and your correspondent as a mouse. That’s me at the far right of the front row, with the plaits. All the other mice have kept their masks in the correct position and are behaving in a suitably mouse-like fashion, while I seem to have tilted mine back, the better to stare at the audience. I remember that I was sulking about not being cast as one of the cool animals. Everybody wanted to be a giraffe or an elephant, who had impressive papier-mache heads and not just a rubbish mask. You may also have noticed that there are more than two mice. Basically, any member of the Sunday School who hadn’t succeeded in being cast as a decent two-by-two animal was pacified by being allowed to be a mouse. This was justified on the grounds that any bodged-up wooden ship would have been full of mice anyway without needing to march them aboard in pairs. We had to scurry up the aisle of the church at the back end of the procession into the ark, squeaking 'Eek eek!'  Darling, the indignity of it all.

Apart from my papier-mache envy, the only thing I can now recall about this performance is how much my arms ached. The conclusion of the first half of the show was a stirring rendition by the entire cast, mice included, of Eternal Father, Strong to Save, a hymn traditionally sung by seafarers and those who love them that implores God to protect ‘those in peril on the sea’. To add to the dramatic effect we all had to hold out our hands in an attitude of supplication for the entire hymn. Mr Brannigan was naturally a consummate professional and stood rock steady throughout, but some of the animals were distinctly wobbly well before the end.

In addition to his career in classical music, Owen Brannigan became well known for his recordings of traditional folk songs from Northumberland and Tyneside. We used to have one of them in the house when I was a child. I really must try to track them down in digital form. I only discovered recently that Owen Brannigan was born in Annitsford, then a small village in the south of Northumberland but now incorporated into Cramlington New Town, and sang in the church choir there as a boy.  A dear friend of mine who died much too young is buried in the churchyard at Annitsford. It always makes me happy to find such connections in my life.