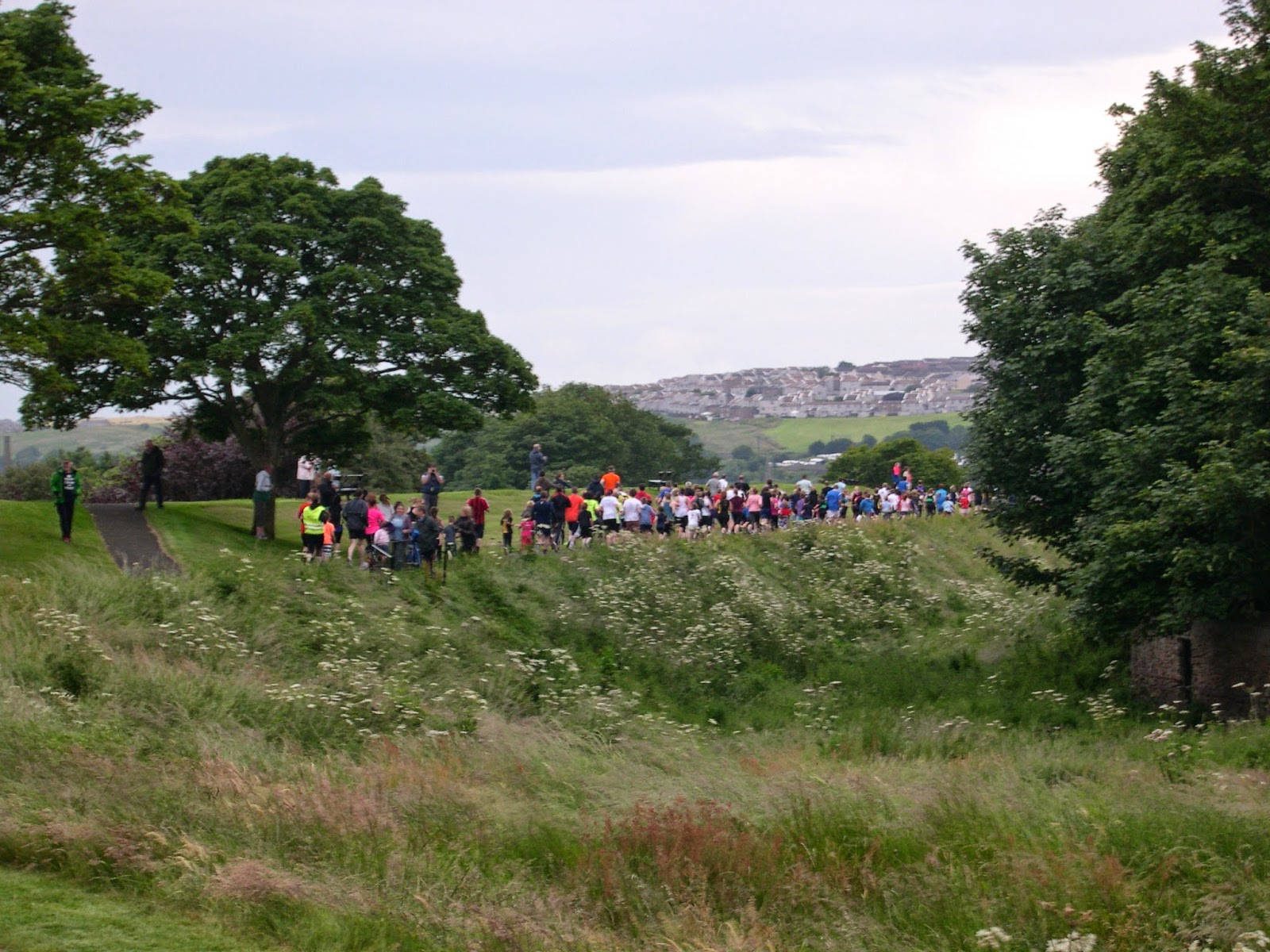 When Berwick was a town under strict military control, a curfew bell rang at 8 pm, for about quarter of an hour. Or to be precise, apparently, for 13 minutes. A fun annual event for local sporty types is to try to run around the town walls before the bell stops ringing. The guide to walking the walls says that it takes an hour at a leisurely pace, so running all the way round in a quarter of that time is a challenge. On a sunny summer evening the walls are a blissful place to be. For this year’s race the glorious weather we have been having recently decided to leave us. But the view is still beautiful. 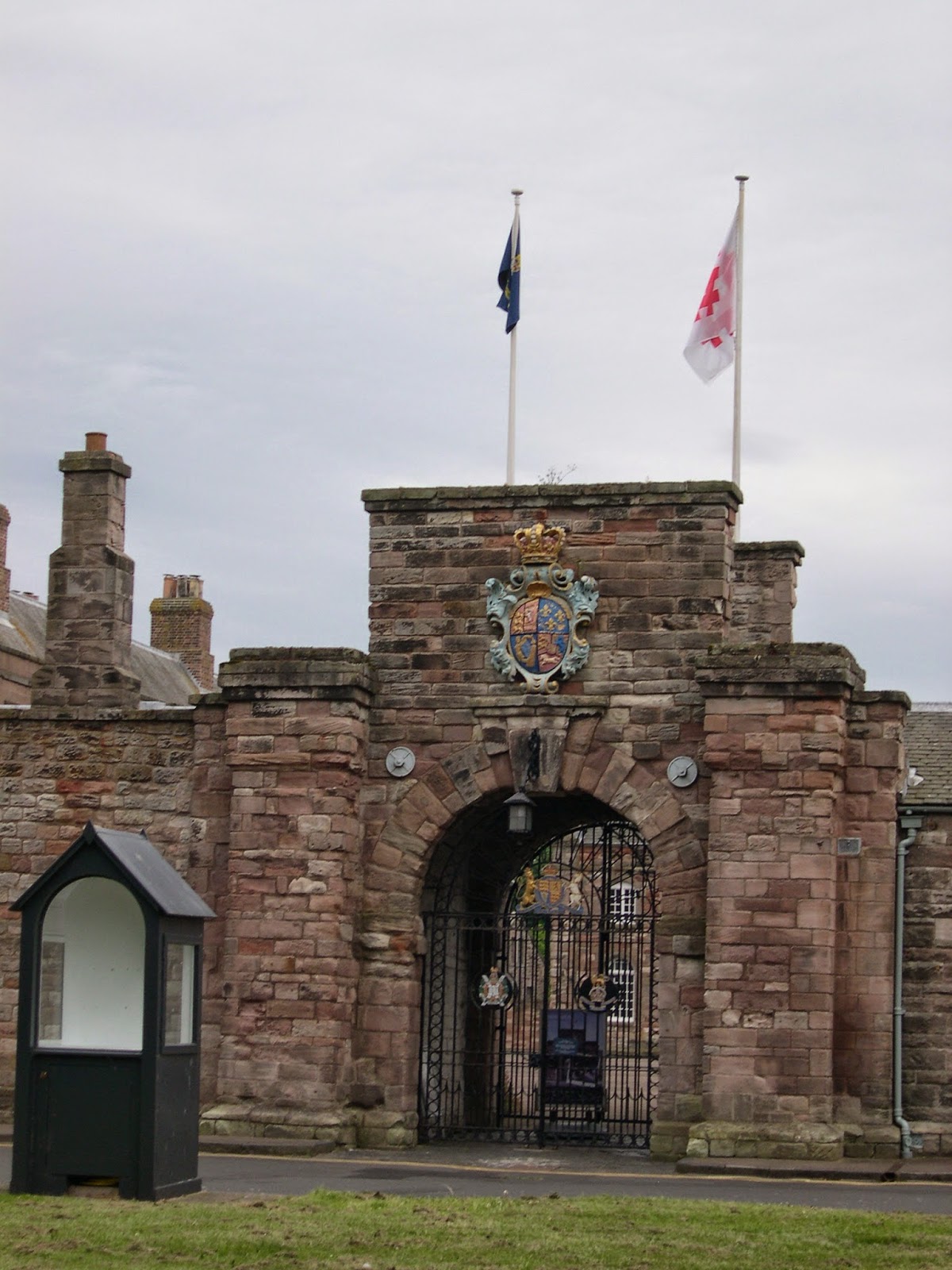 The runners assemble outside the front gate of the Barracks, seen here, and then move up onto the grassy ramparts adjacent to it for the start. (You can read my post about the Barracks here.)

The curfew bell could not actually be heard from where I was standing, which was disappointing, since I can hear bells from my home further round the walls. Next year I think I'll just watch from  my front steps.

Club shirts were seen being worn by the Tweed Striders, the Chirnside Chasers and the Runduns, who I’m guessing come from Duns. The last two are towns on the Scottish side of the border, so this event is yet another example of the cross-border community life we value so much and hope to be able to preserve. 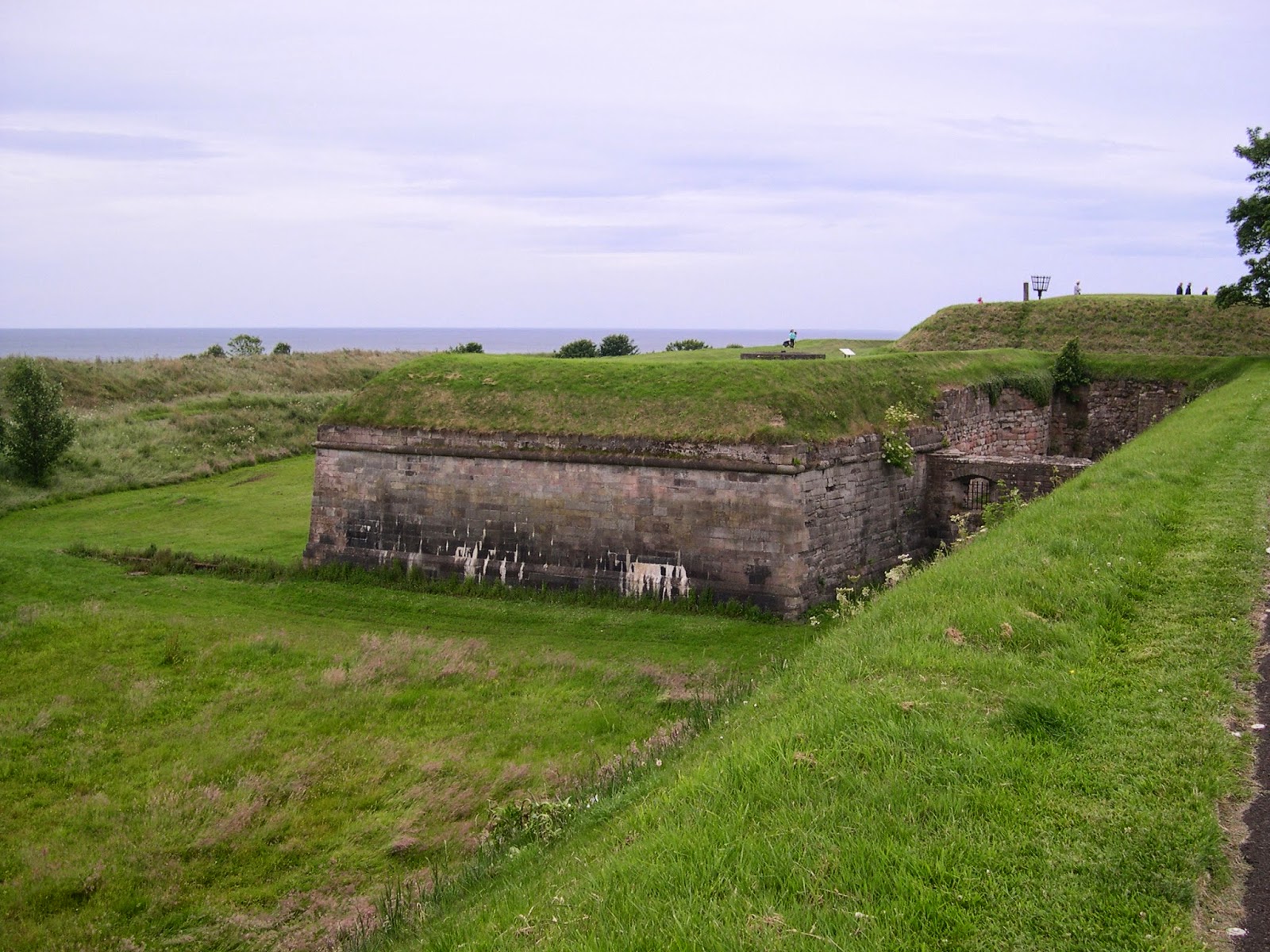 On top of the steady drizzle there was a stiff breeze blowing (there usually is here) and I am sad to report that my hat blew off and landed just over the lip of the embankment in this photo, perched on the very edge of the sheer wall below, in a spot completely inaccessible from either the top or the bottom except at imminent risk of breaking my neck.

As I gazed at it longingly, a boy of about eight came alongside me and said, ‘that’s a steep drop’. Well done that child for paying attention during the health and safety briefing. There are notices at intervals around the walls warning of the Dangers of Steep Drops, for the benefit of walkers who are either completely lacking in common sense or under the influence of an unwise combination of alcohol and bravado. Last year a woman was pulled over the edge by her dog, but reading the notices probably wouldn’t have helped in that case.

I decided that on the whole it was better to have no hat than to have no functioning head to put it on, and went home without it, wet. In any case, I originally acquired it free as a perk of my stewarding duties when a visitor to the Civic Society exhibition left it behind. It’s somebody else’s turn now.

P.S. I have just been to watch the 2015 curfew run, and got the chance to ask one of the organisers whether the bell actually rings. The answer, sadly, is No, because the curfew bell is now so fragile that it would probably not withstand fifteen minutes of vigorous ringing. They promised me that this year the ordinary bells of the Town Hall would be rung for the run instead, but they never were.