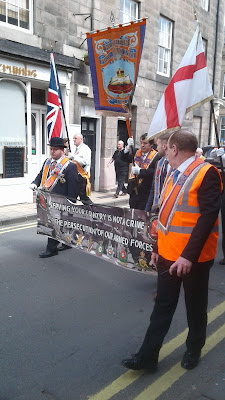 It's been a long time since I posted anything on this blog, because I was living away from the region it concerns for a couple of years. I'm now back in Northumberland and, guess what, the political forces threatening to make life on the English-Scottish border difficult have not gone away. In fact they just get more and more complex.

I'm not living in Berwick any more but I go there regularly to catch up with the amazing community of artists and other creative folk there, which I really miss. This bohemian community is centred on Bridge Street, next to the river. I'd called in to Slightly Foxed bookshop to say hello to owner Simon Heald, and heard him talking to another customer about an Orange march that was apparently assembling in the town centre. I got the impression that the police had been round warning all the shopkeepers on the route.

How very odd, I thought. Many years ago, before I ever lived in Berwick, I came across a small Orange parade heading across the bridge, and was rather startled. I've never seen anything like that since and had assumed that like many old traditions it had died out. I was intrigued by the thought of seeing another one. 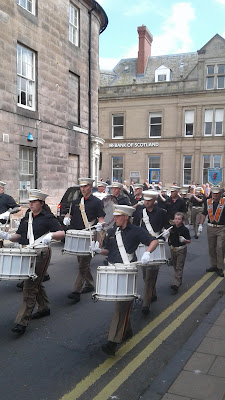 So I had my lunch in the cafe of the YHA in the Dewars Lane Granary and was just heading back up the lane when loud drumming was heard in the distance. I put on a burst of speed and arrived in Bridge Street just in time to see a rather large number of the biggest and loudest drums I've ever seen in a parade rounding the corner, accompanied by the odd flute and a lot of banners.

I have certainly never seen anything on this scale in Berwick before and neither has anyone I spoke to about it. None of the participants seemed to be local. I saw two banners from the Scottish Borders, Hawick and Prestonpans,but the bulk of them seemed to be from Yorkshire. I confess that the existence of groups called Sons of William, Crown Defenders, or plain Loyalist Yorkshire, had previously escaped my notice. Later in the day I saw a child wearing a sweatshirt saying Loyalist Yorkshire and found the sight disturbing in a way I can't quite put my finger on.

Simon in the bookshop, never a man to mince his words, seemed to be the most genuinely angry I've ever seen him about the sight of this lot processing past his shop. He was equally forthright a few years back when the Scottish Defence League, the north-of-the-border version of the notorious English Defence League, staged a march in Berwick. The gist of his views on all of these groups was that the whole bloody lot of them could bugger off. All of the feedback I've heard so far from Berwick locals is along the same lines.

One of the marchers was actually heard to shout No Surrender. During my period of travelling in 2016 I visited the Siege Museum in Londonderry (definitely not Derry in this context) and finally managed to understand what this slogan is all about. It refers to the city's defence against the army of the Catholic James II / VII in 1689. Even when I was in Northern Ireland I found myself thinking quite often that having your head permanently stuck in 1689 is a bit daft. And as for invoking its memory in 2019 in a town that is nowhere near Ireland, it's just, like .... what ??

The only explanation I can think of is that the Loyalist movement now sees the threat of Scottish Nationalism as the new front in the struggle to keep the United Kingdom together, and has decided that Berwick-upon-Tweed is the most appropriate place to make their point. The prospect of this march being repeated every year is deeply unappealing. What makes Berwick so special is that it transcends the border. While it is technically, legally, in England it exists culturally and socially in a place that is neither England nor Scotland. The last thing we want is outsiders trying to arouse artificial and non-traditional national loyalties here. Of course, one could say that all those infuriating London journalists who descended on us in 2014 during the run-up to the Scottish independence referendum were doing essentially the same thing.

I've often said that Berwickers are in denial about just how bad things could potentially get on the border after Brexit and possibly after a second Scottish independence referendum. Brexit has amplified many tensions and conflicts in the UK and unleashed some dark forces. Being a perverse sort of creature, this makes me very glad that I came back to Northumberland. I couldn't care less about encouraging tourism. I'm all about the dystopia.